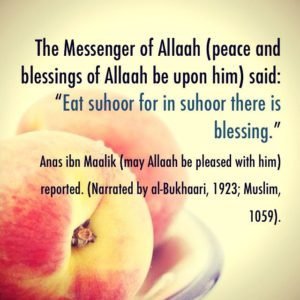 COMMENTARY How great is Allah’s favour upon us that even the partaking of food before dawn for fasting is so greatly rewarded. There are many Ahaadith in which the virtues of “Sehri” are expounded and the rewards mentioned. Allaamah Ain – Commentator on Bukhari – has quoted the virtues of “Sehri” from seventeen different ‘Sahaabah’ and all the “Ulama” are agreed on its being “Mustahab” (desirable). Many people are deprived of this great reward because of their own laziness. Some even go so far as to finish ‘Taraweeh’, eat (what they suppose to be “Sehri’!) and go to bed. What great blessings do they lose! “Sehri” actually means partaking of food shortly before dawn. Some authorities say that the time for “Sehri” commences after half the night has passed (Mirquat). The author of Kash-shaff (Zamakhshari) divided the night into six portions, stating that the last one of these is the time of “Sehri”; so that, when the night (from sunset till dawn) extends over twelve hours, the last two hours would be the correct time for “Sehri”. Then it must also be remembered that to eat at the latest possible time is better and greater in reward than eating earlier, subject to the condition that no doubt remains as to whether “Sehri” had been eaten before the time of dawn. The Ahaadith are full of virtues of “Sehri”.

Rasulullah (Sallallahu alaihe wasallam) said: ‘The difference between our fasting and that of the Ahlul-Kitaab (Jews and Christians) lies in our partaking of food at “Sehri” which they do not.” The Prophet has said, “Eat Sehri, because in it lie great blessings; and again. “In three things, are the great blessings: in “Jama’ah” (company), in eating “Thareed” and in “Sehri”. In this Hadith, the use of the word “Jama’ah” is general, wherefrom we deduce that it includes “Salaat” with “Jamaa’ah” and all those righteous deeds done in company, as thus Allah’s help comes to them. “Thareed” is a tasty preparation, in which baked bread is cooked with meat. The third thing mentioned in this Hadith is “Sehri”. When Rasulullah (Sallallaho alaihe wasallam) used to invite any of the companions to eat “Sehri” with him, he used to say: “Come and partake of blessed food with me.” One Hadith says: “Eat ‘Sehri’ and strengthen yourself for the fast. And sleep in the afternoon (Siesta), so as to gain assistance in waking up in the latter portion of the night (for “Ibaadah”).” Abdullah bin Haarith (Radhiallahu Anhu) reports that one of the Sahaaba said: “I once visited Rasulullah (Sallallaho alaihi wasallam) at a time when he was busy in partaking of ‘Sehri’. Rasulullah then said: “This is a thing full of blessings, which Allah has granted you. Do not give it up.” Rasulullah (Sallallaho alaihe wasallam) in urging us repeatedly for ‘Sehri’ has said: “Even though there be no food, then one date should be eaten or a drink of water taken.” Thus, when there are definitely great advantages and reward in ‘Sehri’, Muslims should endeavour to observe this practice as much as possible. However, in all things moderation is important, and going beyond the bounds of moderation is harmful: neither should so little be eaten that one feels weak throughout the period of fasting, nor should so much be eaten that it causes discomfort. Repeatedly, we have been prohibited from filling the stomach excessively.

In his commentary on “Sahih Bukhari”, Ibne Hajar has mentioned various reasons for the blessedness of “Sehri”:

These are a few of the major reasons; there are many others as well. Some ‘Sufis’ are in doubt as to whether the eating of ‘Sehri’ conflicts with the object of fasting or not. They maintain that the object of fasting is to stay away from food, drink and sexual desires, therefore ‘Sehri’ is against the object of fasting. In my opinion the amount to be eaten varies according to different persons and their activities. Foe example, for those students who are busy seeking knowledge of ‘Deen’, too little food at ‘Sehri’ as well as ‘Iftaar’ will be harmful; for them it is better not to have too little, because they seek ‘Deeni’ knowledge, which is very important (for the preservation and spread of Islam). similar is the case of those who are busy with ‘Dhikr’ and other ‘Deeni’ activities. Other people who have no such hard work to do should eat little at ‘Sehri’.

Once Rasulullah (Sallallaahu alayhi Wasallam) announced to those proceeding for ‘Jihaad’: ‘There is no virtue in fasting while travelling.’ That was in the month of Ramadhaan, when some Sahaaba were fasting. Allamah Sha’raani mentions in Sharh Iqna: ‘A covenant was made with us that we shall not fill our stomachs (completely) when eating, especially in the nights of Ramadhaan.’ It is better that one should eat less in the nights of Ramadhaan than on other nights. After all, what is the utility of fasting after having filled oneself at ‘Sehri’ and ‘Iftaar’? the religious divines have said, ‘Whoever remains hungry in Ramadhaan shall remain safe from the evil of ‘Shaytaan’ throughout the year, until the next Ramadhaan.’

Sharah Ihya Ulumuddin mentions the experiences of some saints, such as Sahl bin Abdullah Tastari, who used to eat only once every fifteen days, while in Ramadhaan he ate only one morsel; but in order to follow the Sunnah, he used to have a drink of water daily for ‘Sehri’ and ‘Iftaar’. Shaykh Junayd always used to fast throughout the year. However, when his noble friends would visit him occasionally, he used to break his fast and eat with them, saying, ‘The virtue of breaking fast and eating with (such noble) friends is not less than that of ‘Nafl’ fasting.

Similarly, we can mention the experiences of numerous saints who through eating less used to discipline their inner-selves, but let us bear in mind that it should not be carried to such extremes that the’religious’ activities and responsibilities are neglected, as a result of weakness of the body.
Virtues of Ramadhaan