The Messenger of Allah ﷺ said: “Verily your Lord is Generous and Shy. If His servant raises his hands to Him, He becomes shy to return them empty.”

Inherit From The Prophets

Whoever desires to be one who inherits from the prophets and one who reaps from their fields of cultivation, let him learn beneficial knowledge – it being knowledge of dīn – for in a ḥadīth [it is mentioned], ‘The ʿulamāʾ are the heirs of the prophets.’ Let him also attend the gatherings of ʿulamāʾ, for indeed they are meadows of Paradise.

A Muslim on his face & knees in prayer is stronger than a king on his throne. Increase your strength 5 times daily with Salaah!

The Best of days

The spiritual virus of the porndemic is more spiritually virulent and destructive than the physical effects of the COVID pandemic.

Protect yourself from such a virus with the mask of Salaah, Zikrullah and Tilawah of the Qur’aan.

There was a Sheikh who was teaching his students Aqeedah (faith), He taught them ‘la ilaha illa Allah’ and explained it to them.
The Sheikh loved keeping pets, so he was given a parrot by one of the students as a gift.

And with days the Sheikh started to like the parrot.  He used to take him in his lessons, until the parrot knew how to say la ilaha illa Allah, He would to utter it night and day.

One day the students found their Sheikh crying and sobbing.  When they asked him the reason, he told them that a cat attacked the parrot and killed it.  They said: Is this the reason you are crying! If you wish we will bring you another parrot better than that one.

The Sheikh said: I am not crying because of this… But it made me cry when the cat
attacked the parrot.  It was shouting and screaming until it died.  He use to say la ilaha illa Allah a lot.  However, when he was attacked by a cat he forgot to say it.
He did nothing but scream!  Because he used to say it with his tongue only, and his heart did not learn it, so it didn’t feel it!

Then the Sheikh said: I am afraid to be like this parrot, we live our lives repeating la ilaha illa Allah with our tongues, but when death comes we forget it because our hearts did not know it.

When he told his students, they started crying in fear of lack of honesty in saying la ilaha illa Allah.
___________
I ask Allah give us death with ” ﻻ ﺍﻟﻪ ﺍﻻًﺍﻟﻠﻪ
” in our hearts and upon our tongues, 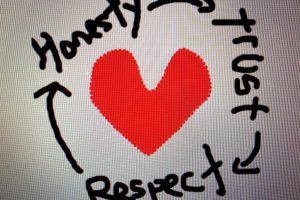 A honest and truthful girl.

One night, as per his usual practise, Hadrat Sayyiduna ‘Umar – may Allah be pleased with him – was walking around Madina Shareef with his slave.

In fact, it was his habit to walk around the streets and pathways of Madina Shareef during the night with the intention of looking after the people in the blessed city and also to see that no harm came to them. As he walked along, at a certain stage, he felt tired and he decided to lean on the wall of a certain house to have a small rest. Morning was also fast approaching.

From this house, the voice of an old lady was also heard and she was commanding her daughter to mix some water with the milk. However, her young daughter was refusing to do this. The daughter told her mother that the Ameerul Mo’mineen had prohibited people from mixing water in the milk and he had also publicly made this announcement. However the mother said, “At this time, ‘Umar is not watching you that you should be so frightened.” However, the young girl mentioned, “Even if ‘Umar is not watching at this moment, the Creator of Umar is still watching.”

Hadrat Sayyiduna Umar – may Allah be pleased with him – who was listening to this conversation was extremely impressed by the honesty of this young girl. He then ordered his servant to keep an eye on this house.

Dua for safety from calamities